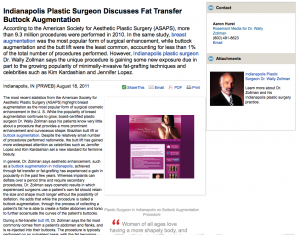 According to the American Society for Aesthetic Plastic Surgery (ASAPS), more than 9.3 million procedures were performed in 2010. In the same study, breast augmentation was the most popular form of surgical enhancement, while buttock augmentation and the butt lift were the least common, accounting for less than 1% of the total number of procedures performed. However, Indianapolis plastic surgeon Dr. Wally Zollman says the unique procedure is gaining some new exposure due in part to the growing popularity of minimally-invasive fat-grafting techniques and celebrities such as Kim Kardashian and Jennifer Lopez.

The most recent statistics from the American Society for Aesthetic Plastic Surgery (ASAPS) highlight breast augmentation as the most popular form of surgical cosmetic enhancement in the U. S. While the popularity of breast augmentation continues to grow, board-certified plastic surgeon Dr. Wally Zollman says his patients know very little about a procedure that provides a more prominent enhancement and curvaceous shape: Brazilian butt lift or buttock augmentation. Despite the relatively small number of procedures performed nationwide, the butt lift has gained more widespread attention as celebrities such as Jennifer Lopez and Kim Kardashian set a new standard for feminine beauty.

In general, Dr. Zollman says aesthetic enhancement, such as a buttock augmentation in Indianapolis, achieved through fat transfer or fat-grafting has experienced a gain in popularity in the past few years. Whereas implants can deflate over a period time and require secondary procedures, Dr. Zollman says cosmetic results in which experienced surgeons use a patient’s own fat should retain the size and shape much longer without the possibility of deflation. He adds that while the procedure is called a buttock augmentation, through the process of collecting a patient’s fat he is able to create a flatter abdomen and torso to further accentuate the curves of the patient’s buttocks.

During a fat-transfer butt lift, Dr. Zollman says the fat most commonly comes from a patient’s abdomen and flanks, and is re-injected into their buttocks. The procedure is typically performed on an outpatient basis, with the fat becoming reintegrated into their own tissue in a matter of hours or days. While the buttock augmentation of the past often left large scars, the incisions of the current day procedure are 1-3 milimeters in length, and fade quickly.

However, Dr. Zollman says the main reason the fat transfer method is especially popular with the buttock augmentation is because of the natural-feeling results. He adds that despite this recent growth in popularity among both genders, he has been performing this type of procedure at his Indianapolis practice for more than 12 years. “Women of all ages love having a more shapely body, and men feel the butt augmentation gives them a more masculine butt.”

Dr. Wally Zollman earned his medical degree from the Indiana University School of Medicine. He then completed his plastic surgery residency at the University of Mississippi School of Medicine. Dr. Zollman is certified by the American Board of Plastic Surgery, and remains dedicated to providing his patients with the safest and most effective procedures available. He is a member of the American Society of Plastic Surgeons, the Indianapolis Medical Society, and the Indiana State Medical Association.